Many of you here who play games have Galactic Civilizations already (at least some version of it). The new expansion pack, Galactic Civilizations III: Retribution is essentially designed around making the game a lot more interesting during your play-through.
Here's the problem with 4X strategy games: There are times they're really fun (like at the start) but there are periods where they can get bogged down. That's why 4X games tend to be a bit niche. With Retribution, what we did was spend a lot of time playing through and figuring out what points in the game felt like they needed something.
So, here is what we came up with:
First, early game there aren't enough strategic paths. That is, most people just colony rush.
Second, mid game you would have many new colonies that were just building up but they weren't that worthwhile. Thus, you would end up with a lot of "next turn".
Lastly, the late game grind. This is a big problem in 4X games in particular. Just getting units around quickly on large maps was a chore.
So, how are we addressing these challenges in Retribution?

Artifacts. As the game begins, scientists have begun finding Precursor artifacts scattered around planets. Even Earth has one. So do other planets. These artifacts, when controlled and activated, give your civilization specific powers. Some big, some small. One artifact, when activated, might randomly teleport a ship across the galaxy. Another one might simply uncover a selected area of the map. And still another might finish a technology.
These artifacts allow you to control the pacing. It costs a lot of resources to activate an artifact to give it a "charge." Do you use that artifact immediately, or do you hold onto it for later? For instance, do you want to get an early tech to give you an immediate advantage, or do you hold onto it until later where some key tech might take 20 turns?

Cargo Ships. The second problem we've run into and tried to solve (and failed) in the past, is getting colonies built up reasonably fast. The way we've done this before was to have your population increase really quickly. As in, literally, like 100 million people per turn on a new planet. Let's...try not to think too much about that. But the alternative was to make colonies useless compared to your home planet.
In Retribution, we've introduced Cargo ships. It is, in hindsight, an obvious idea. Simply build cargo ships filled with processed goods, send them to your colonies, and give them the production directly. Now, population can increase a lot more slowly which means that playing "tall" (small but powerful empires) becomes a lot more viable.

Hypergates. Nearly all space strategy games, including Sins of a Solar Empire, have phase lanes and such between destinations. Galactic Civilizations is one of the few that actually lets you travel in true space anywhere you want. Now this is good and all, but in the late game it can be tedious to travel across large maps.
At various times, we had technologies that made all your ships fast or, alternatively, you could design your ships to be really fast. On paper, this should be fine, but in reality it's tedious at best and frustrating at worst. The solution: Hypergates. --> Bild 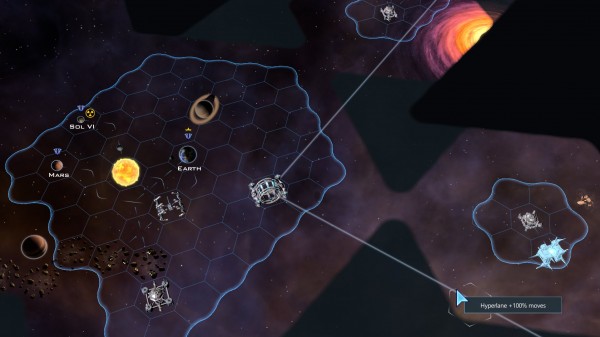 .
When you build a hypergate, you can connect it to any other hypergate and it will create a hyperlane between them. Yes, we use the word "hyper" a lot, but it could be worse: we could use "quantum" everywhere, as that is the new hip word these days. Wait. Quantumgates! Nevermind.
Anyway, your ships don't need to travel to a hypergate to use them. They will simply go to the nearest hyperlane and travel that way if it's faster to take it (you don't have to do anything, the path finding will automatically use them if it's the faster way to get to your destination).
Hypergates are very expensive to construct so the galaxy won't be too filled with them. But, there should be enough of them that late game travel (or even early game expansion and war) should be a lot more interesting.
Now, on top of all that, we are adding new alien civilizations, including bringing back the Drath and the Korath, re-designing the technology tree, and bringing in the exciting conclusion campaign to the GalCiv III story. Short version: future humans may seem like nice diplomats, but it was a really, really bad idea for aliens to think we were soft and unfamiliar with war. As it turns out, humans are really good at warfare when they're pushed to it.
Homepage * YouTube-Kanal * Twitter * Facebook * Twitch.tv
Möchtest du das Writing Bull Projekt unterstützen? - Patreon * Shoplink Gamesplanet
Nach oben
Antworten
54 Beiträge